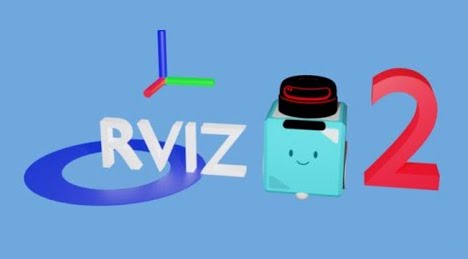 Hi, and Welcome to this new series of posts.

In this series, we are going to explain how to add elements to RViz2. We will start with TF, then we will continue with Robots Description, then Cameras, PointClouds, Lasers, and so on.

In this first post, we are going to see how to add TFs in RViz2.

In order to learn how to add TFs in RViz2, we need to have ROS installed. We already prepared a rosject ready for that: https://app.theconstructsim.com/#/l/47f74f81/. You can download the rosject on your own computer if you want to work locally, but just by copying the rosject (clicking the link), you will have a setup already prepared for you. 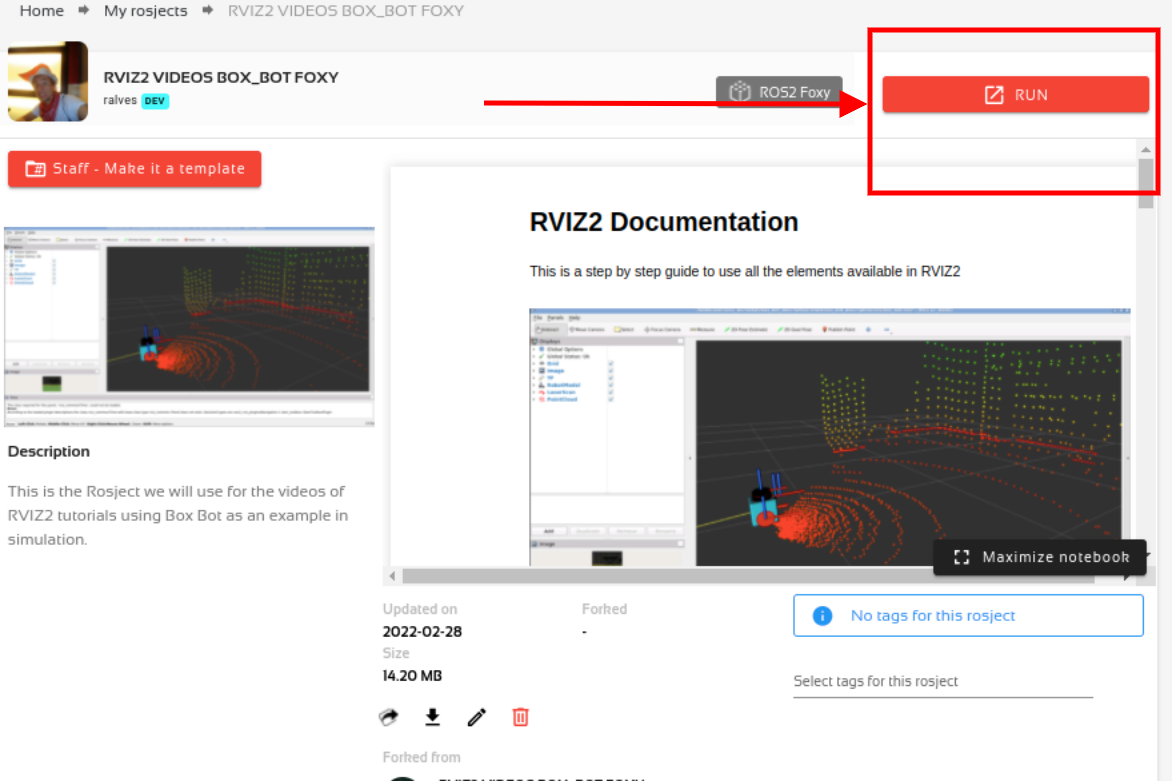 After you have clicked the Run button, the rosject should load and you should see a notebook that is open automatically:

The notebook contains the instructions to launch a simulation.

In order to launch the simulation, let’s start by opening a new terminal:

After having the first terminal open, let’s run the following commands to launch a simulation:

The commands we just executed only launch the world, but there is no robot on it yet.

Now, in a second terminal, let’s spawn the robot with the commands below:

Now that the robot has been successfully spawned, let’s now open RViz2. For that, let’s run the following commands in a third terminal.

In order to see the simulation, you can click on the Open Gazebo button:

The final image you get should be similar to the following: 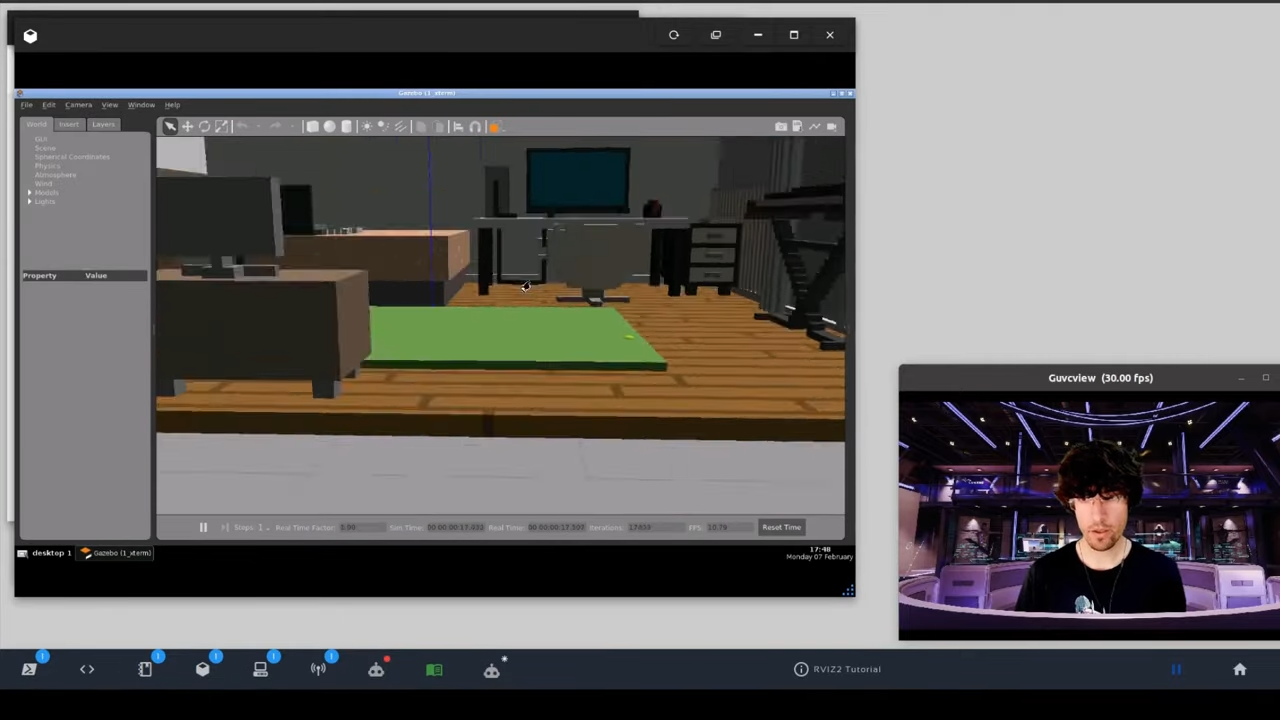 See rviz2 in the Graphical Tools

In order to see rviz2 (RViz2), you have to click the Open Graphical Tools button, in case the graphical window did not open automatically:

Now that you can see rviz2, let’s set the fixed frame on the top left to /odom (Odometry), then let’s click the Add button on the bottom left and add a TF.

Once TF is added, let’s disable the “All Enabled” option to avoid getting confused with all those TFs that are shown. Let’s shown only specific frames: chassis, left_wheel, odom, right_wheel. In the end, our rviz2 should look similar to the following: 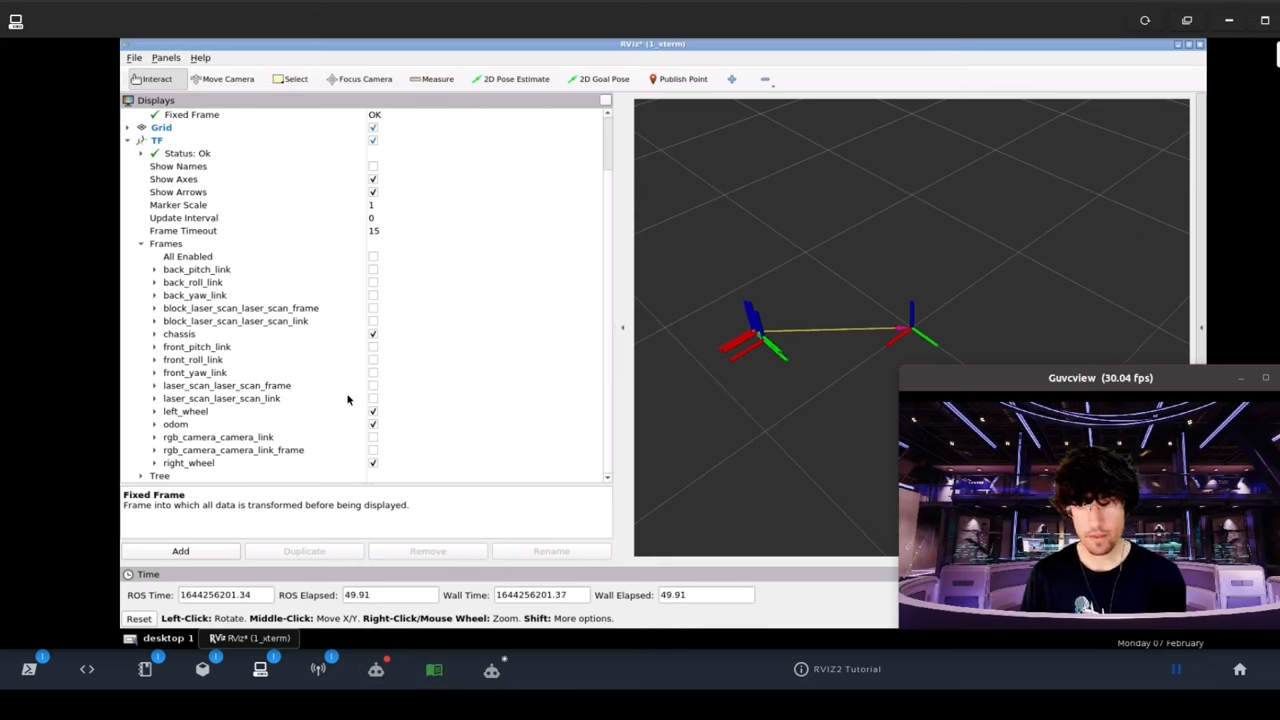 We must also click Show Names to show the frame names in RViz2.

Moving the robot with teleop

In order to see the frames of the robot moving in rviz2, let’s run the Keyboard Teleop in a fourth terminal using the following commands: 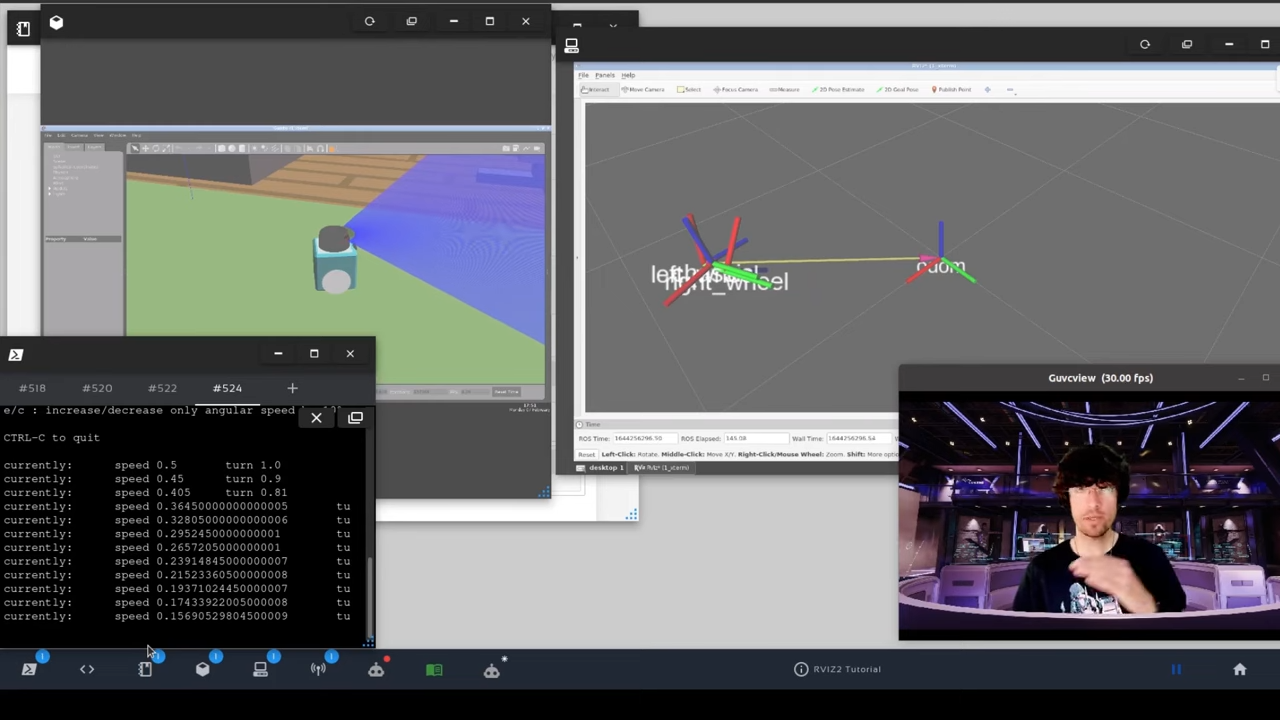 Connecting to a real robot

In order to see the TFs of a real robot, let’s click on the Real Robot Lab button that is available when you are not on the “Desktop” page of The Construct. After clicking Real Robot Lab, please select a robot and click Book Now. It’s free. 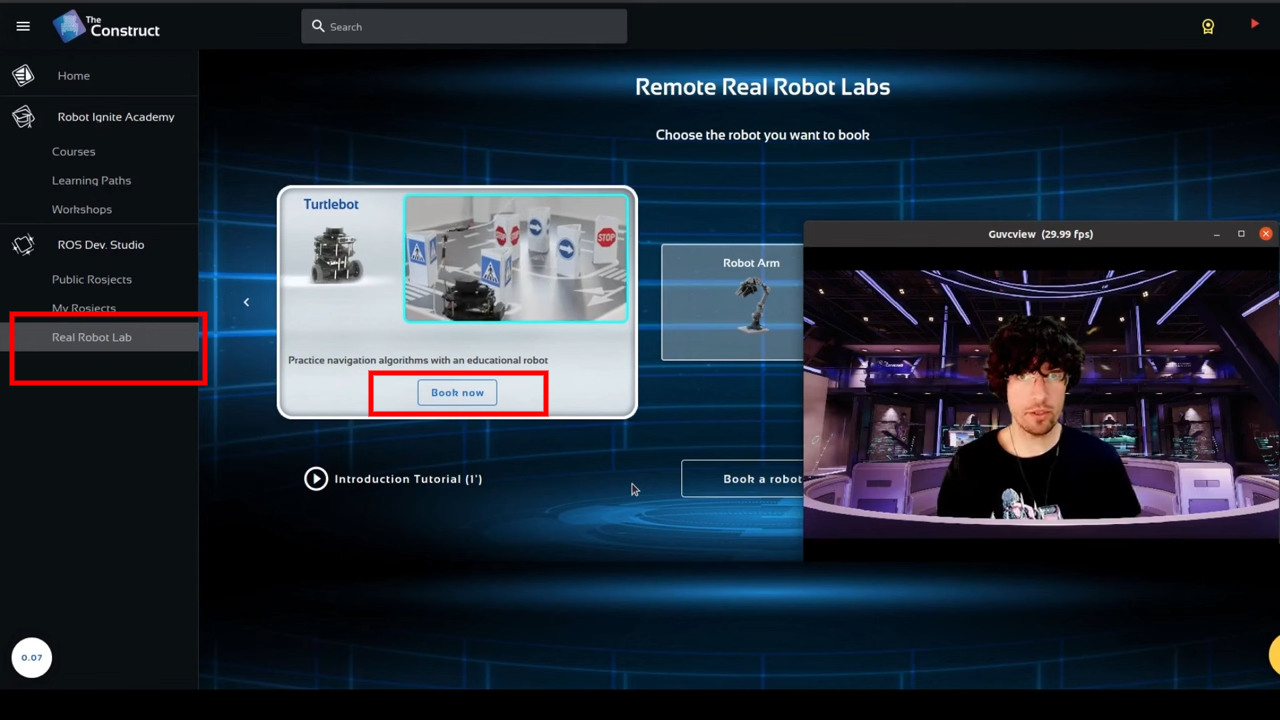 When you have the robot available for you, open the rosject and click on the button to connect to the real robot. 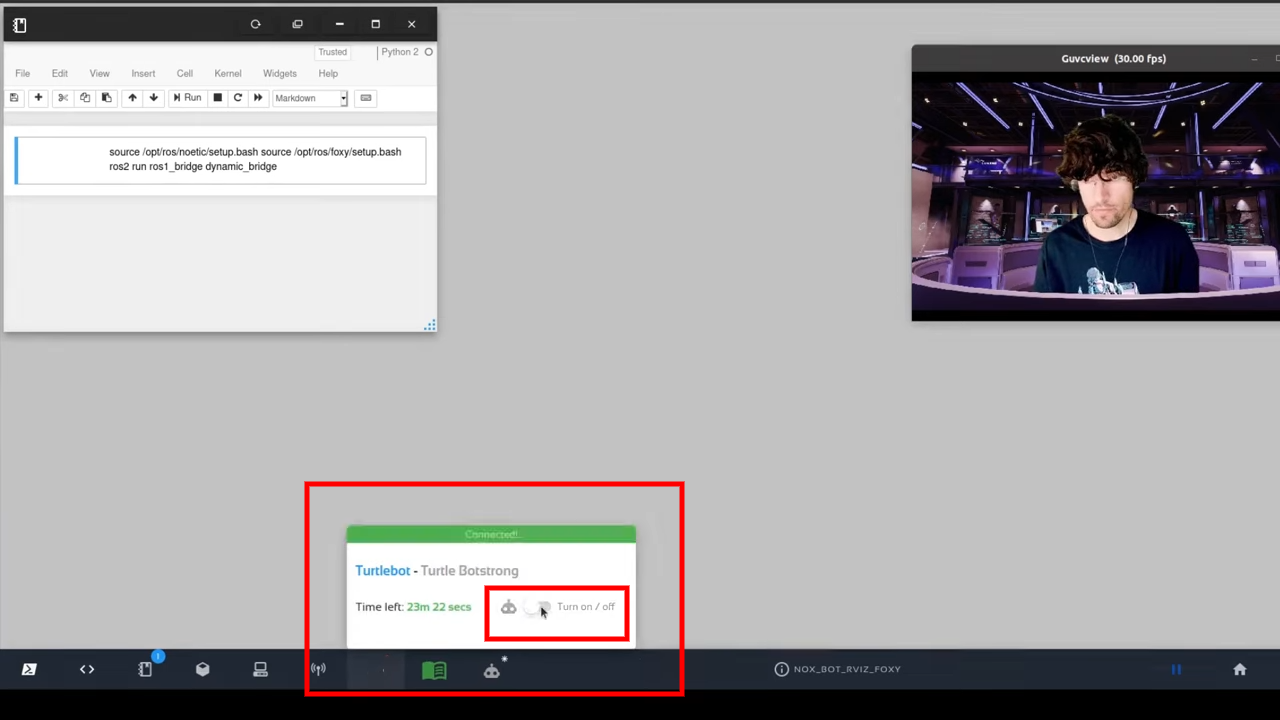 Connecting to the Real Robot Lab

After the connection is successfully established, you should have something similar to the following: 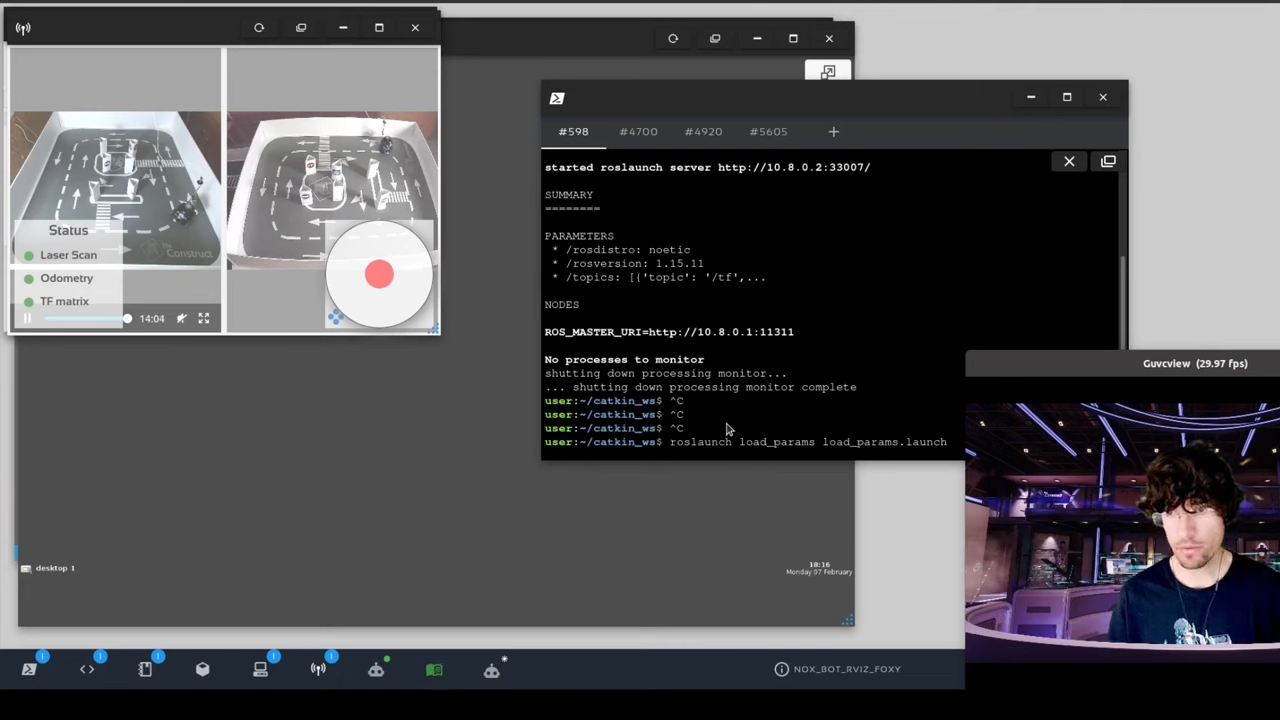 Before loading ros1_bridge, let’s load the parameters that we want to do the bridge.

Open a terminal and type the following:

The command above loads basically the instructions saying: Hey, ros1, publish these specific topics because I want them to be available on ROS2.

Now, let’s run the parameter_bridge in a second terminal:

Now that ros1_bridge is running, we should be able to easily see ros2 topics in a third terminal:

You should see some topics listed, and the one we are most interested in today is the /tf topic.

If we now just open rviz2:

we should now do the same procedure that we did previously, in order to see the TF data in RViz. Please refer to the section See rviz2 in the Graphical Tools already explained above (set /odom as the Fixed frame, and add the TF panel).

Moving the robot with ROS1

Now that we are connected to our robot and we have RViz2 setup ready, we can move the robot either with ROS1 or ROS2.

Let’s move it with ROS1, by running the following commands in a fourth terminal:

If you now move the robot by following the instructions, you should see the reflections in the camera of the Real Robot, and also in the RViz2: 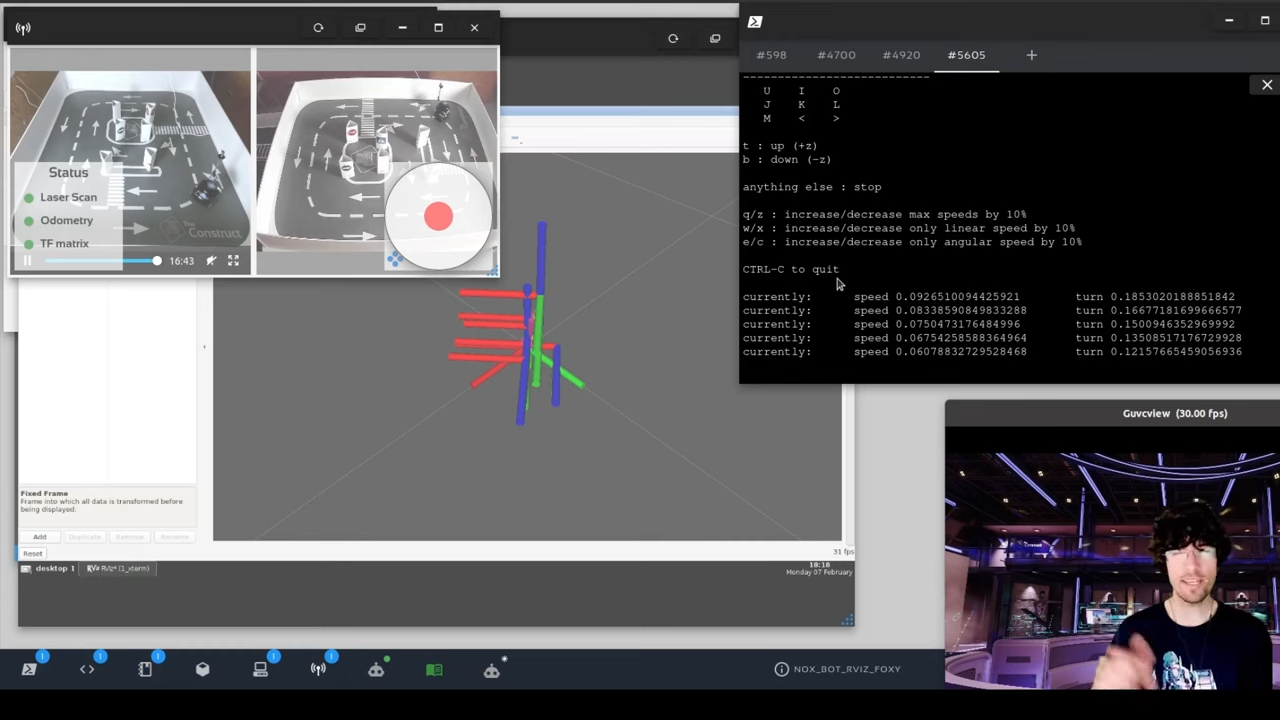 Congratulations. You now know how to see TF data in RViz2. 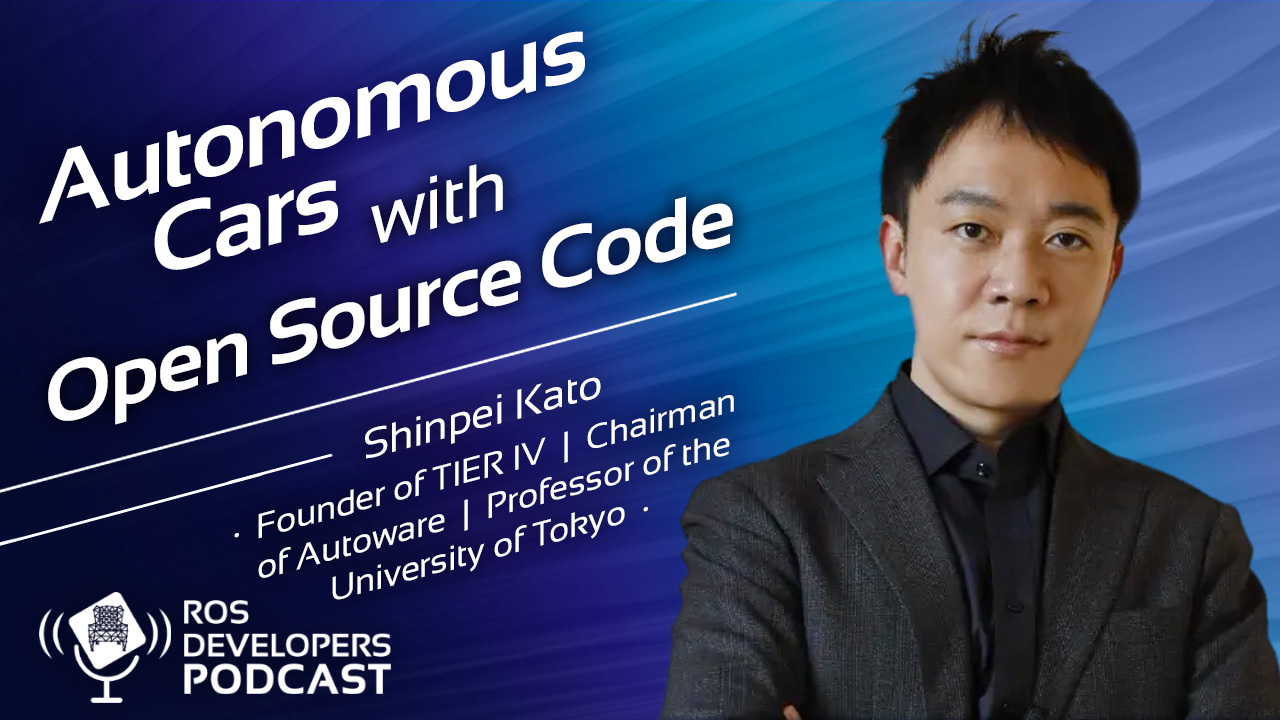 I would like to dedicate this episode to all the developers working on using ROS for autonomous...

END_OF_DOCUMENT_TOKEN_TO_BE_REPLACED 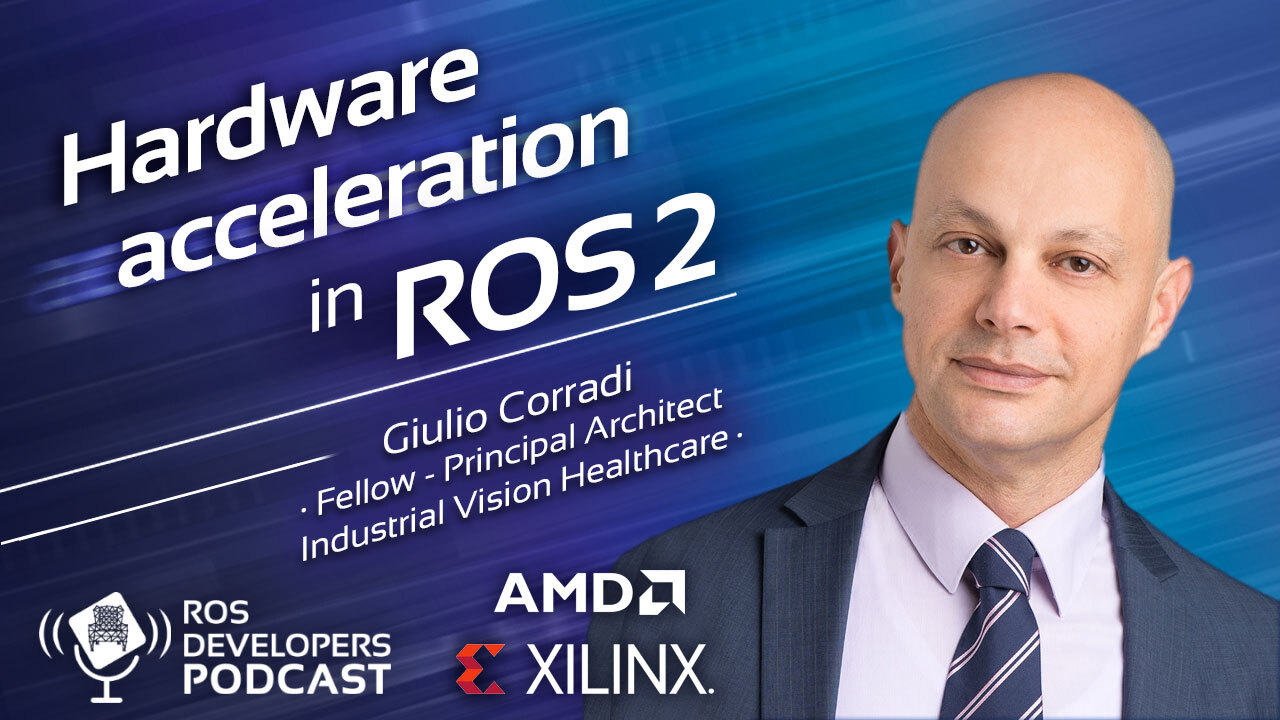 I would like to dedicate this episode to all the ROSDevelopers out there that have started or are...