ROS Python Classes. Why do we need them 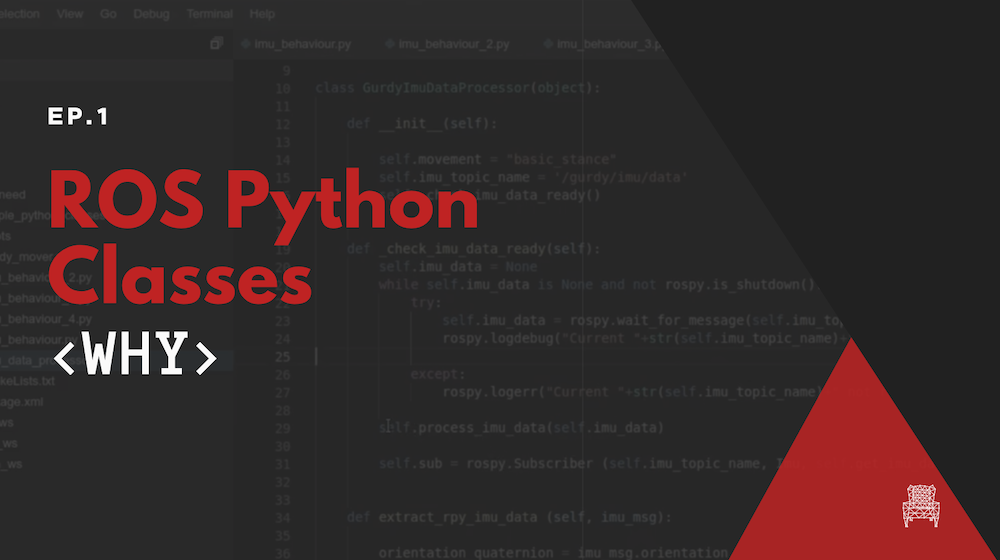 The first thing you need to do is to copy the ROSject aforementioned. Click on the link to get an automatic copy.

To launch the copied ROSject, go to your ROSDS account and click on the Open button of the copied rosject (see image below). Remember that the rosject you have to open is called WhyINeedIt. 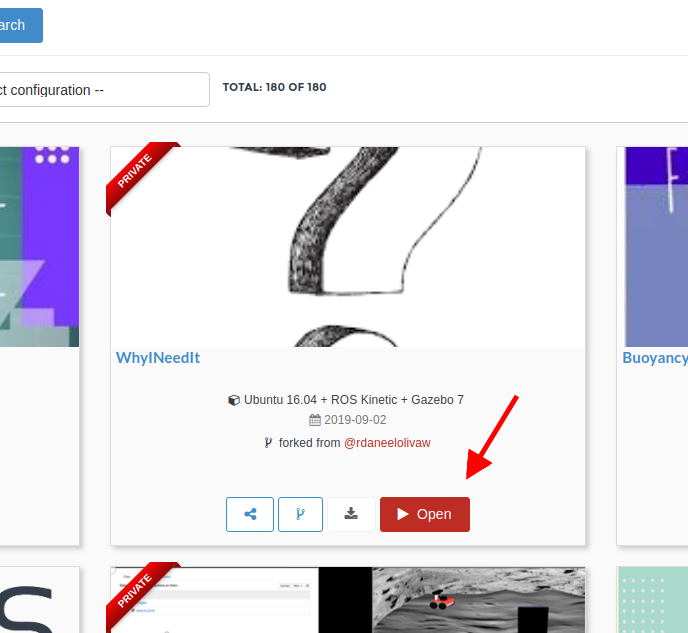 Once the rosject is open, you must see a screen like this:

At this point, you have succeeded in launching the ROSject.

Let’s launch a simulation because we want a python class that detects when the robot is upside down. For that, let’s do the following:

After that, you can type “gurdy” or try to find the Gurdy robot by using the scroll bar. Once the robot is selected, you just click Start Simulation.

You now should see the simulation of the Gurdy robot as in the image below: 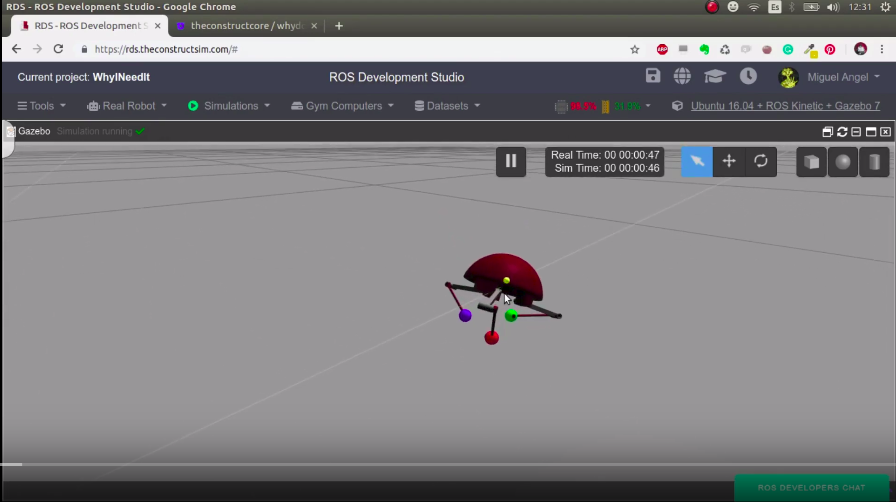 The code used in this post can be found at ~/catkin_ws/src/. You can see the content with:

You can also find the code through the Code Editor. For that, let’s click Tools -> IDE as can be seen on the image below: 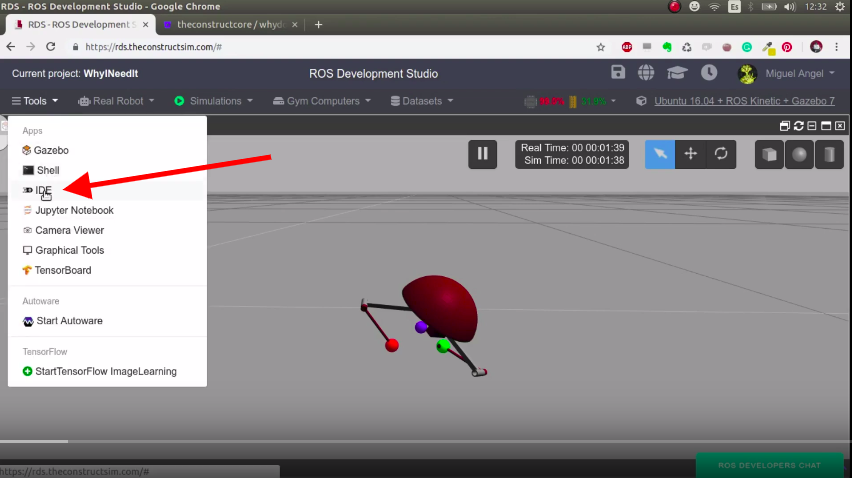 Once the IDE is open, we can find all the code that will be used to control the robot inside the catkin_ws folder (catkin workspace). 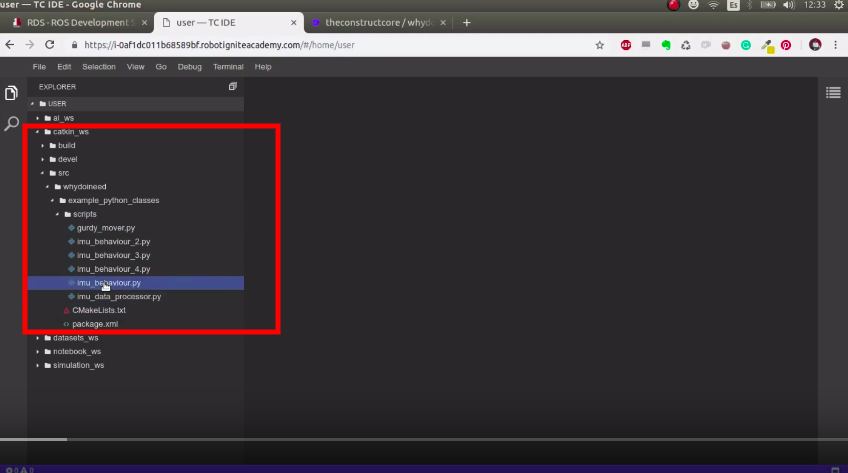 Detecting when the robot is upside down

In order to detect when the robot is upside down, we have to use the imu topic, which publishes the robot orientation. We can find the topic with the command  rostopic list | grep imu :

We see that the topic is named /gurdy/imu/data. We can see what is being published in this topic with rostopic echo -n1 /gurdy/imu/data , as exemplified below:

In the output above, we are more interested in the orientation, because is what tells us whether the robot is upside down or not.

In order to detect when the robot is upside down, we execute the imu_behaviour.py found on the catkin_ws with the command below:

By manually turning the robot upside down, we can see in the output of this script that it correctly detects when that happens. In order to move the robot upside down, on gzweb (the simulation interface), you click on the “Rotate Mode“, then you rotate one of the arcs. In the example below, we rotate the green arc. 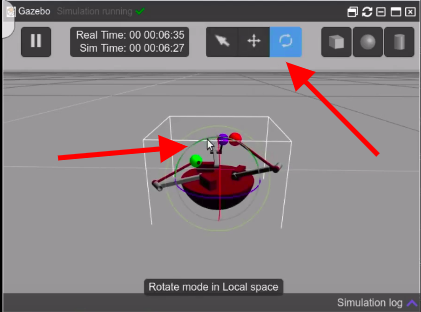 Gurdy upside down on ROSDS

Moving the robot to the right orientation automatically

We have the script called imu_behaviour_2.py which automatically detects when the robot is upside down and publish on the topics listed above to have the robot back to normal position. The content of the file is the following:

The magic happens on the function get_imu_data shown above. Based on the position of the robot it decides which movement is going to be executed. We can execute the script with the command below:

With the command above running, if we now flip the robot around, it will automatically recover its position.

Although the imu_behaviour_2.py does the job it is proposed, everything is in a single file and publishers are created every time the execute_movement_gurdy function is called by the get_imu_data one. In addition to that, if we are working on a big project, it is better to have some people working on detecting when the robot is upside down, other people detecting on flipping the robot, so on and so forth.

To make this possible, it is better to have different python files, each one with its different class. We do that by creating the

gurdyJointMover on gurdy_mover.py. With this structure, we could have different people working in each of the classes, having the Single Responsibility Principle.
With the classes split into different files, our code is easier to maintain. Please have a look at the different files to better understand the code and how to interacts with the robot.
You can test each script at a time. The more “optimized” version of our script is found on imu_behaviour_4.py which can be executed with:

Remember that we also have a live version of this post, which can be found on the video below:

If you liked the video and the post, please leave your thoughts on the comments section of the video. You can also subscribe to our channel on YouTube and press the bell for a new video every day.

Co-founder and Ai-Simulations Engineer in The Construct. Industrial Engineer specialized in Robotics, he has worked in the Industrial Robotics Institute in Barcelona and competed in Robo-Cup At Home. His aim is to create robots that make people happy through Real Intelligence AI. 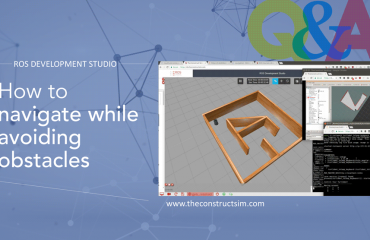 [ROS Q&A] 49 – How to navigate while avoiding obstacles 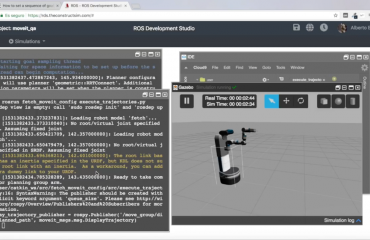 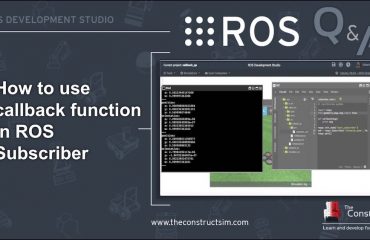