How to create a ROS Sensor Plugin for Gazebo

Recently I need to create a plugin for a light detector. Reading the tutorials, I missed a concrete example about how to create a sensor plugin. Hence, I had to investigate a little bit about it. The result is the content of this post.

How to: light sensor plugin in Gazebo

Following the indications provided at the answers forum of Gazebo, I decided to build a very simple light detector sensor based on a camera. Instead of using a raytracing algorithm from lights, the idea is to use a camera to capture an image, then use the image to calculate the illuminance of the image, and then publish that illuminance value through a ROS topic.

Since the plugin is for its use with ROS, the whole plugin should be compilable using a ROS environment. Hence, be sure that you have installed the following packages in your Linux system:

This tutorial, has two parts: on the first one we will explain how to create the plugin, and on the second, how to test that it works

Creating a ROS package for the plugin

First thing, is to create the package in our catkin workspace that will allow us to compile the plugin without a problem.

For this purpose, since we are using a camera to capture the light, we are going to create a plugin class that inherits from the CameraPlugin. The code that follows has been created taking as guideline the code of the authentic gazebo ROS camera plugin.

Create a file called light_sensor_plugin.h inside the include directory of your package, including the following code:

As you can see, the code includes a node handler to connect to the roscore. It also defines a publisher that will publish messages containing the illuminance value. Two parameters have been defined: fov (field of view) and range. At present only fov is used to indicate the amount of pixels around the center of the image that will be taken into account to calculate the illuminance.

Next step is to create a file named light_sensor_plugin.cpp containing the following code in the src directory of your package:

That is the code that calculates the illuminance in a very simple way. Basically, it just adds the values of all the pixels in the fov of the camera and then divides by the total number of pixels.

Substitute the code of the automatically created CMakeLists.txt by the code below:

Update the package.xml and compile

Now you need to include the following line in your package.xml, between the tags <export></export>

Now you are ready to compile the plugin. Compilation should generate the library containing the plugin inside your building directory.

You need a world file that includes the plugin. Here it is an example. Create a worlds directory inside your plugin package, and save the following code in a file entitled light.world. This world file just loads the camera with its plugin so it may be a bit ugly but enough for your tests. Feel free to add more elements and models in the world file (like for example, in the picture at the top of this post).

Now the final step, to create a launch that will upload everything for you. Save the following code as main.launch inside the launch directory of you package.

Now launch the world. Be sure that a roscore is running or your machine, and that the GAZEBO_PLUGIN_PATH environment var includes the path to the new plugin.

You can see what the camera is observing by running the following command:

After running that command, a small window will appear in your screen showing what the camera is capturing. Of course, since your world is completely empty, you will only see something like as ugly as this: 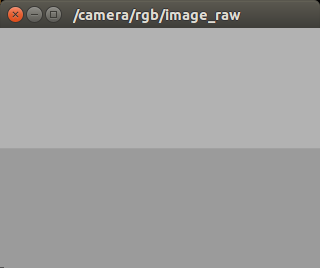 Try to add some stuff in front of the camera and see how it is actually working. 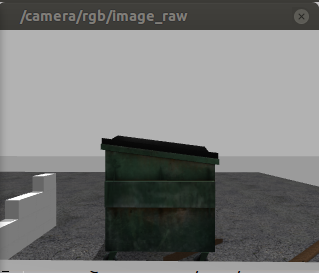 Now it is time to check the value of illuminance by watching the published topic (/light_sensor_plugin/lightSensor). Just type the following and you are done:

You should see the topic messages been published in your screen, something like this: 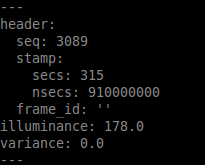 Now you have a plugin for your Gazebo simulations that can measure (very roughly) the light detected. It can be improved in many ways, but it serves as a starting point for understanding the complex world of plugins within Gazebo.

You can use it in you desktop Gazebo or even inside the ROS Development Studio. It is also independent of the ROS version you are using (just install the proper packages). 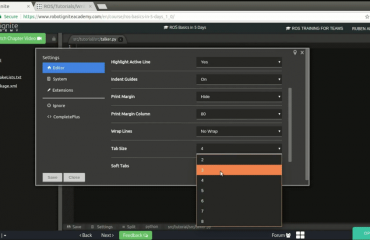 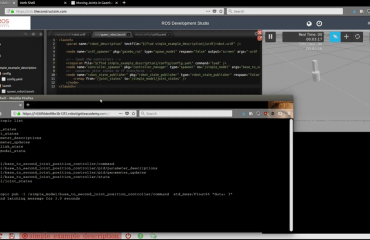