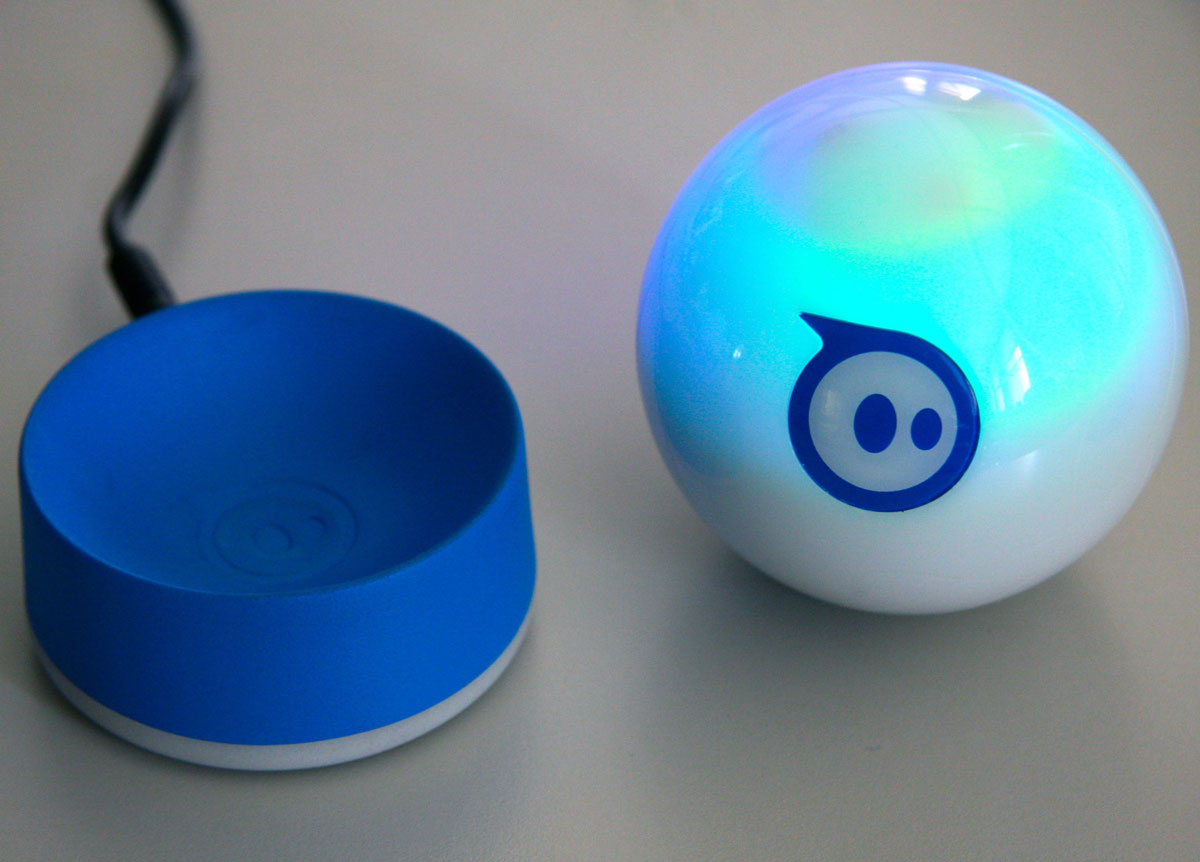 You probably know the Sphero robot. It is a small robot with the shape of a ball.

In case that you have one, you must know that it is possible to control it using ROS, by installing in your computer the Sphero ROS packages developed by Melonee Wise and connecting to the robot using the bluetooth of the computer.

Now, you can use the ROS Development Studio to create ROS control programs for that robot, testing as you go by using the integrated simulation. Let’s see how to do that.

First step, develop your Sphero program in the simulation environment

The ROS Development Studio (RDS) provides off-the-shelf a simulation of Sphero within a maze environment. The simulation provides the same interface as the ROS module created by Melonee, so you can test your programs on the environment, and once working properly, transfer it to the real robot. 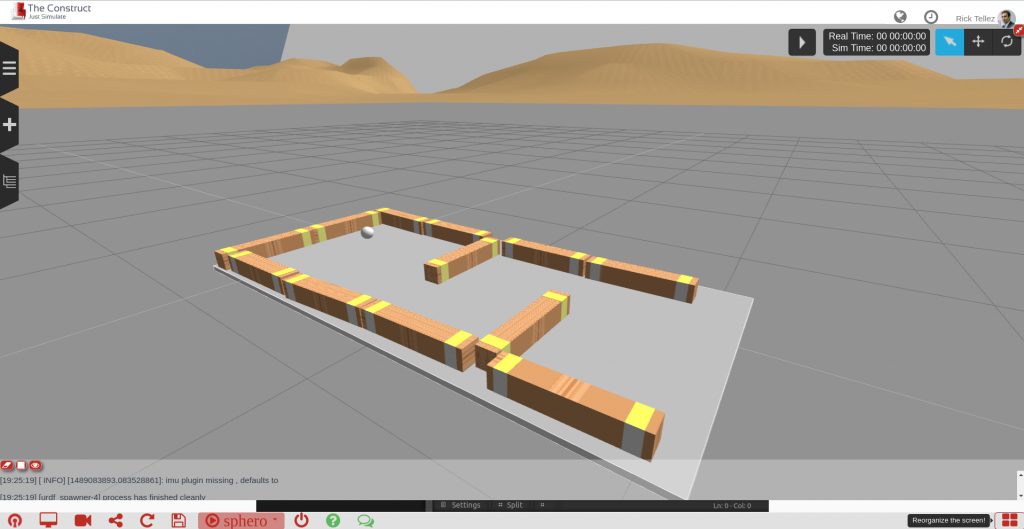 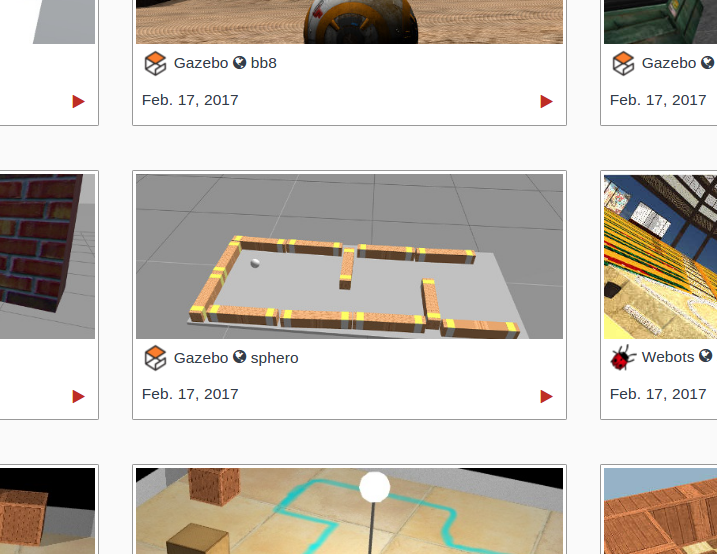 Press the red Play button. A new screen will appear giving you details about the simulation and asking you which launch file you want to launch. The main.launch selected by default is the correct one, so just press Run. 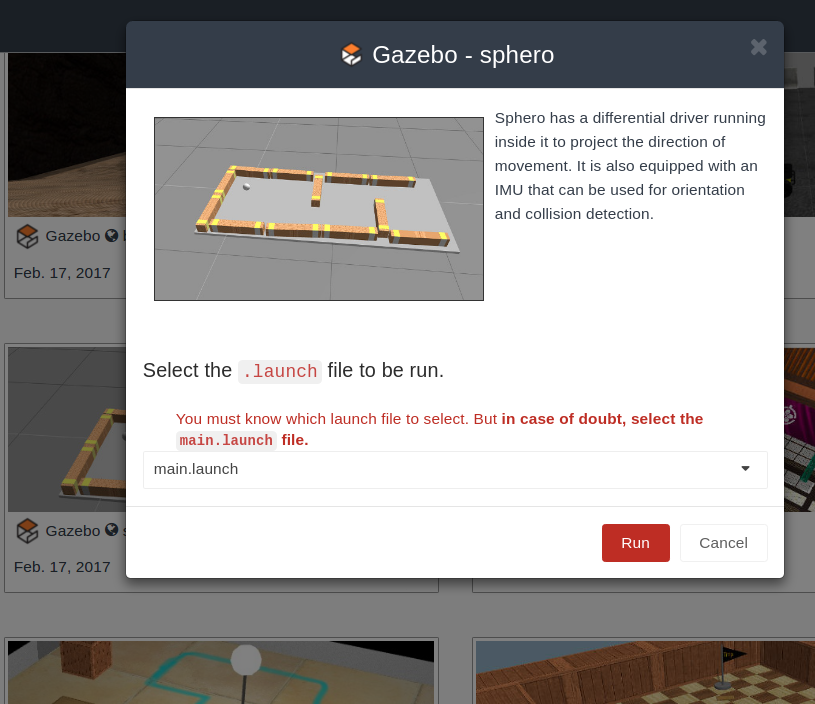 In either case, after a few seconds the simulation will appear together with the development environment for creating the programs for Sphero and testing them. 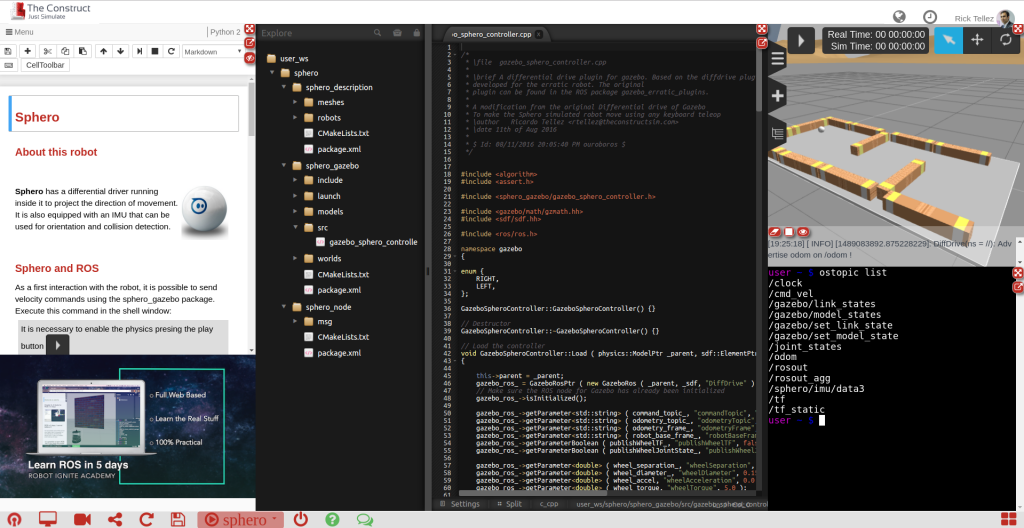 On the left hand side you have a notebook containing information about the robot and how to program it with ROS. This notebook contains just some examples, but it can be completed and/or modified at your will. As you can see it is an iPython notebook and follows its standard. So it is up to you to modify it, add new information or else. Remember that any change you do to the notebook will be saved in a simulation in your private area of RDS, so you can come back later and launch it with your modifications. 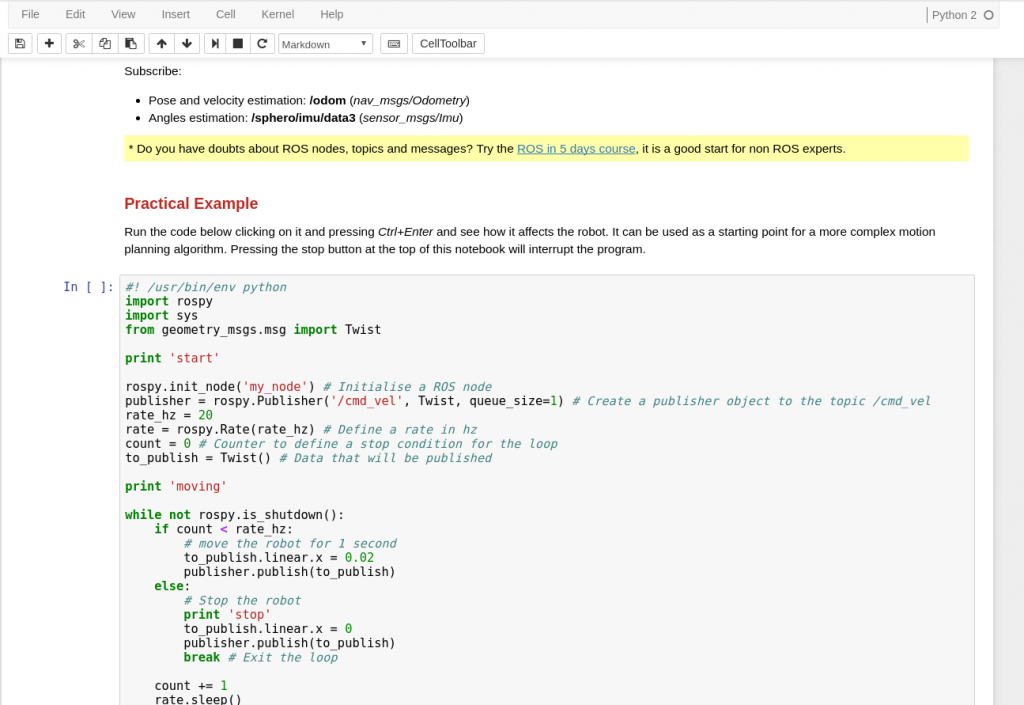 You must know that the code included in the notebook is directly executable by selecting the cell of the code (do a single click on it) and pressing the small play button at the top of the notebook. This means that, once you press that button, the code will be executed and start controlling the Sphero simulated robot for a few time-steps (remember to have the simulation activated (Play button of the simulation activated) to see the robot move).

On the center area, you can see the IDE. It is the development environment for developing the code. You can browse there all the packages related to the simulation or any other packages that you may create. 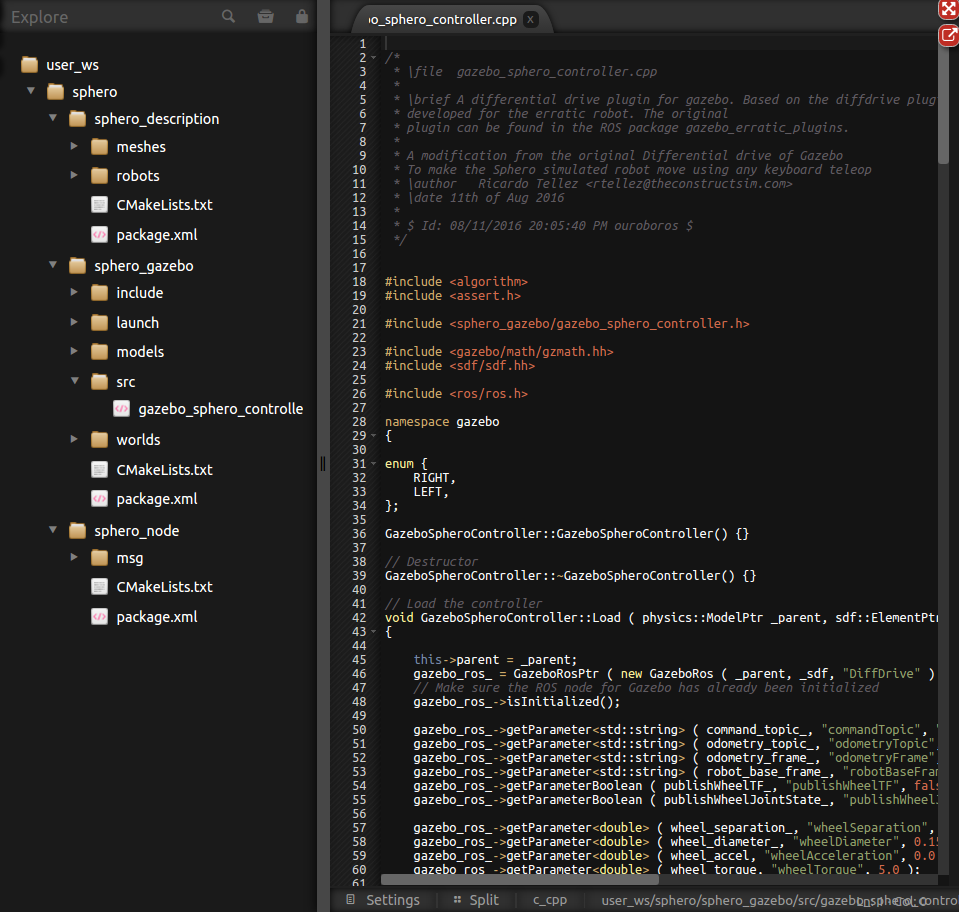 On the right hand side, you can see the simulation and beneath it, the shell. The simulation shows the Sphero robot as well as the environment of the maze. On the shell, you can issue commands in the computer that contains the simulation of the robot. For instance, you can use the shell to launch the keyboard controller and move the Sphero around. Try typing the following:

Now you must be able to move the robot around the maze by pressing some keys of the keyboard (instructions provided on the screen). 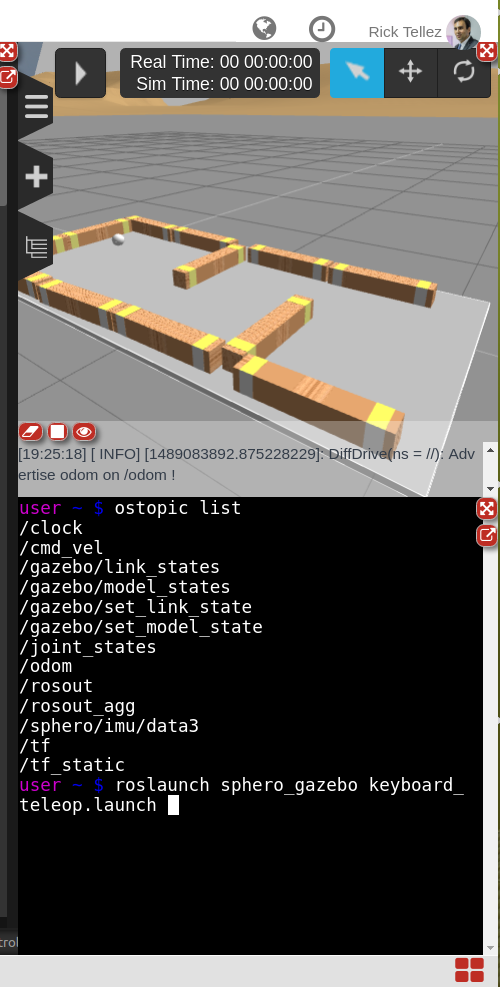 You can also launch there Rviz, and then watch the robot, the frames and any other additional information you may want of the robot. Type the following:

Then press the Screen red icon located at the bottom-left of the screen (named the graphical tools). A new tab should appear, showing how the Rviz is loading. After a while, you can configure the Rviz to show the information you desire. 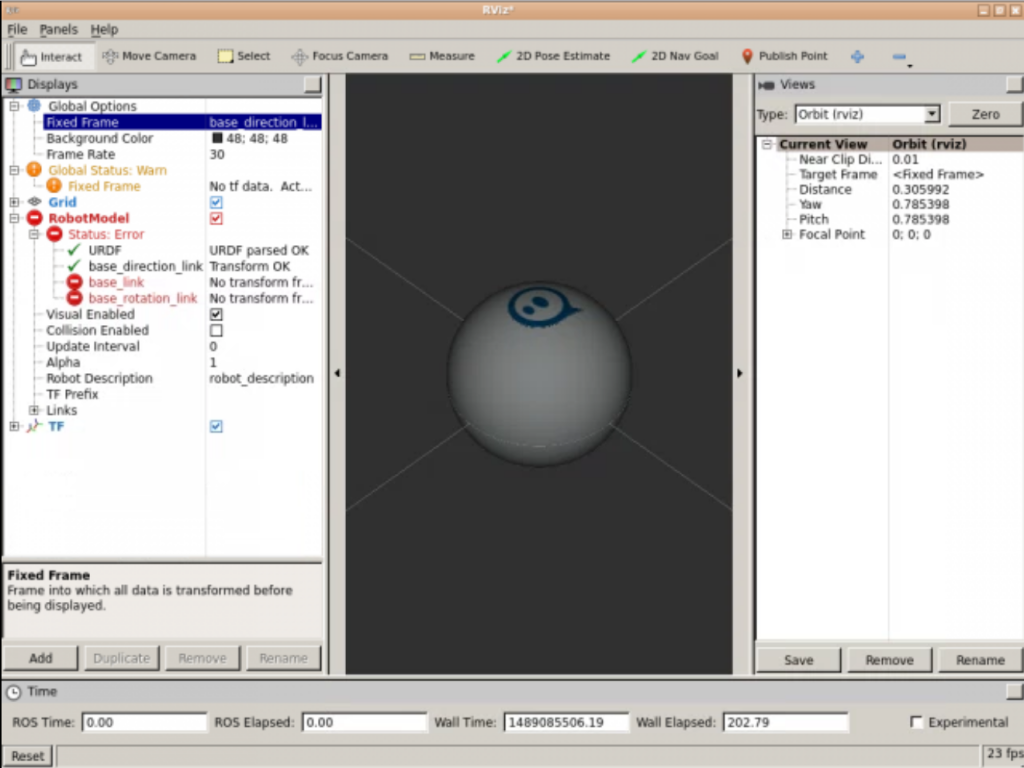 There are many ways you can configure the screen to provide more focus to what interests you the most. 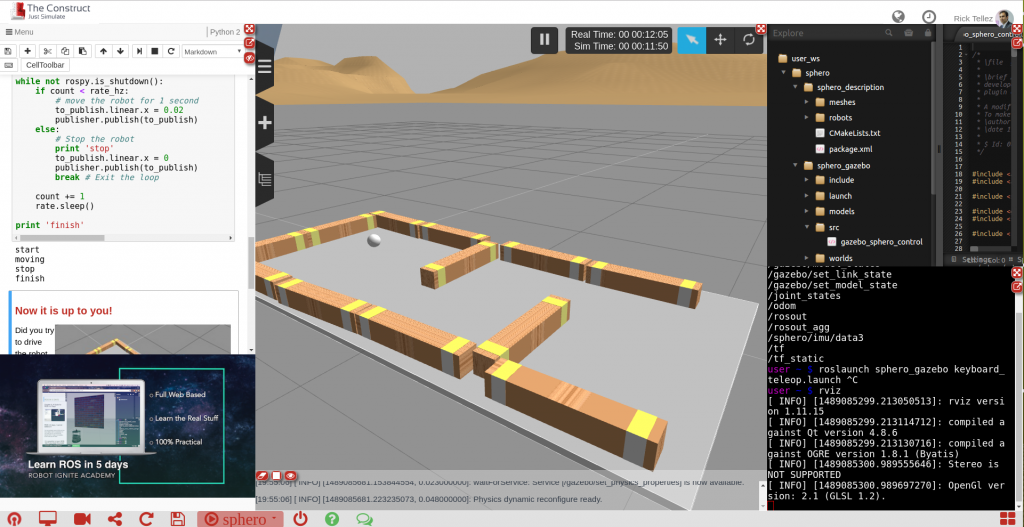 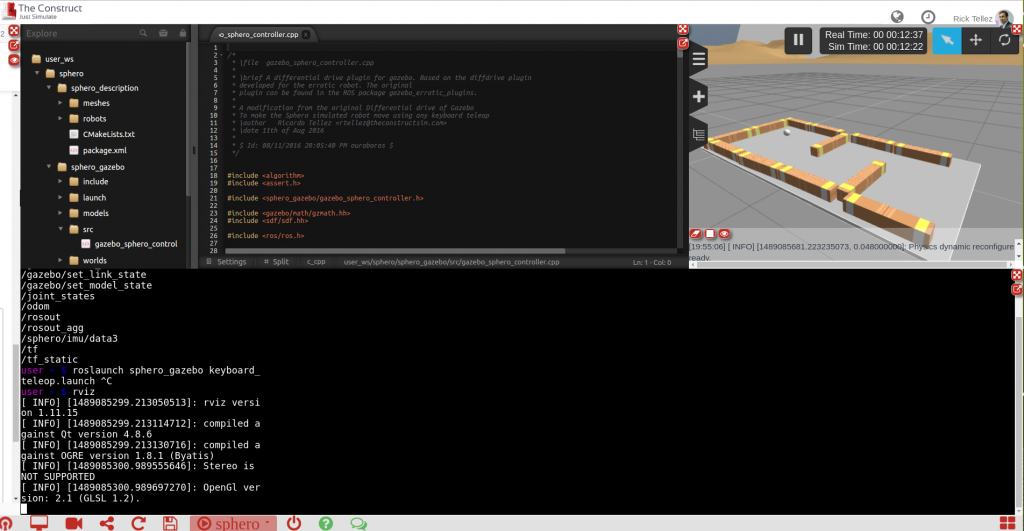 Second step, transfer your program to the real robot

Once you have finished your program in the simulation environment, it is time to test it with the real robot. For that, you will need several steps:

Install the Sphero ROS node in your local computer

At this point, you should have a local computer that has ROS installed on it, that can also communicate with the Sphero. Now it is time to get your programs developed in the simulation environment and execute them in the local computer controlling the real Sphero.

Once you have your Linux computer connected to the Sphero robot, you can test your Sphero program. For that, first you need to download the code you did on the simulator to your local computer:

We have shown here how you can reproduce the professional way of developing software for robots, by using simulations first to create and test the programs, and then, transfer the running programs to the real robot.

There exists an easier way to run the programs developed at the RDS which consists of stablishing a connection between the RDS and the real robot. This option is only available to paying users of RDS.

Video: showing how The Construct instructs about ROS and performs tests in simulation and real Sphero transfer with the students: 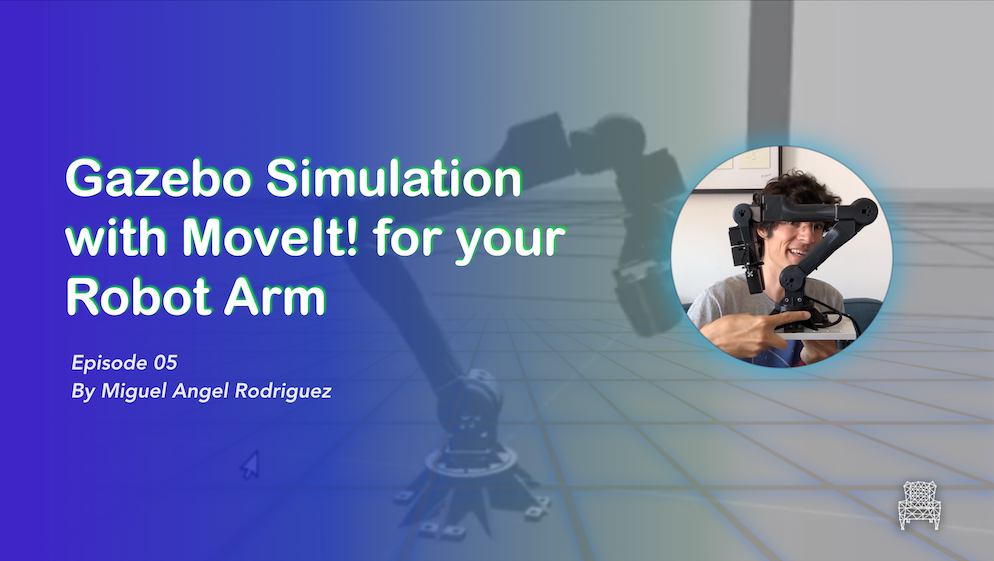 About In this video you will learn: How to create a gazebo simulation for your Robot Arm How to integrate the gazebo... 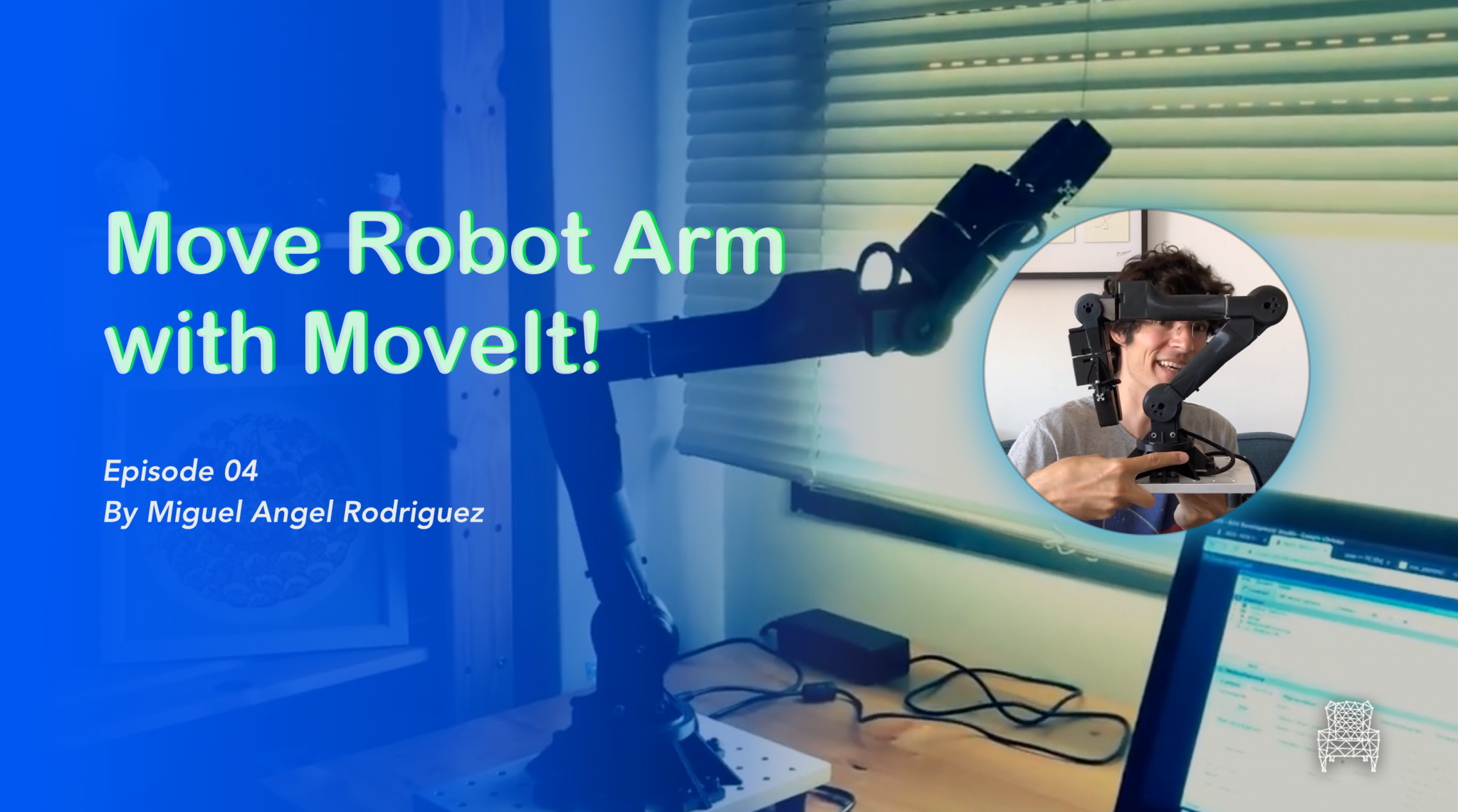 In today's post, we are going to connect what we learned in the two previous posts, which are How to control a Robot... 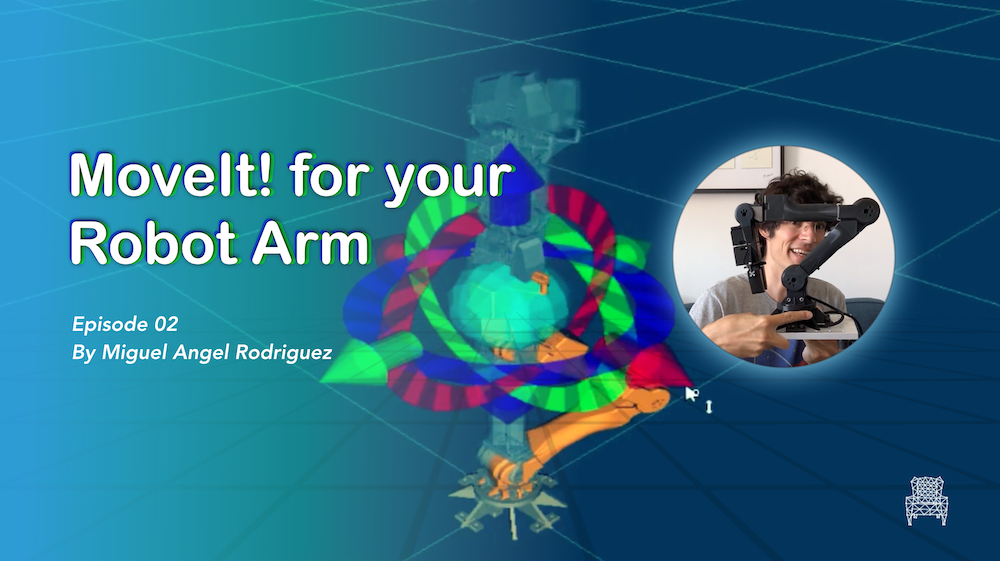 Following up our previous post about how to control a Robot Arm with ROS, today we are going to learn how to set up a...