Humanoids in the New Media Age 2015 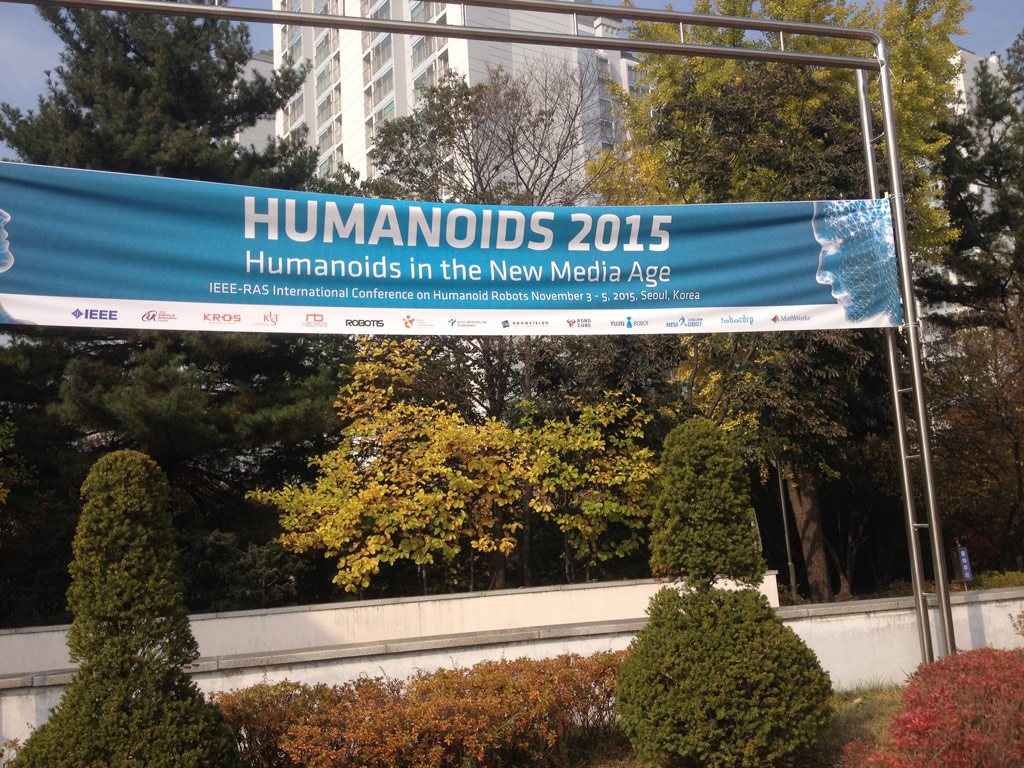 Last week, the Humanoids 2015 was held in Seoul, Korea. It was the first Humanoids conference after the finals of the Darpa Robotics Challenge (DRC), and was hold at the winners country, the Team KAIST. Hence it was no surprise that the whole conference contained several activities related to that challenge, specially, demos of the Hubo robot, visits to the labs and a small version of the same contest as a life contest at the Humanoids (the mini-darpa challenge).

The Humanoids conference is a small conference when compared to others like IROS or ICRA. And I really appreciate that because it gives you the chance to interact more closely with people that is actually in the field of humanoids. Less people, less concurrent sessions and more interactions.

The conference lasted three days, being the first one dedicated to the workshops, and the other two, to the main conference itself. 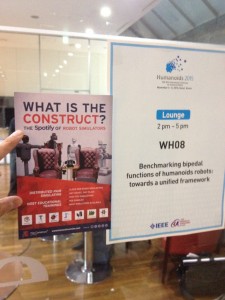 As for the workshops there were many being hold at the same time. In my case I attended the Benchmarking bipedal functions of humanoids robots: towards a unified framework one, where I gave a talk about how to use cloud simulations for benchmarking in a general and unbiased way. Very interesting papers were presented at that workshop about how to build a general framework to benchmark walking in humanoids (presented by different partners of the Koroibot project)

The main conference was divided into plenary talks, papers presentation and interactive sessions (based on videos and/or posters). Additionally, along the day there were guided visits to the laboratories of KIST (the Korean Institute for Science and Technology) and a full demo of the Hubo robot doing all the DRC tests.

I loved the two plenary talks, specially the first one given by Aude Billard from EPFL. She showed a beautiful path of research towards the creation of robots that can do better than humans (super-human competences). She showed her results towards that path with a robot that was able to grasp a racket when thrown towards it, by making use of dynamical systems. It was impressive to see how her robot was able to grasp rackets and even balls, when the human was not able to do it. 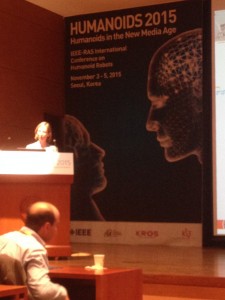 The second plenary talk was given by Russ Tedrake, one of the participants at the DRC. He explained several problems they faced when trying to control the robot for the DRC, basically using model-based control. He explained his quest towards trying to exploit the structure of the governing equations of model based control in order to create more robust control for robot dynamics. I really enjoyed his talk, even if I did not understand it very much.

The part of the papers was very well organised, since each author was allowed only with 10 minutes. Given the complexity of the subjects there, having a short presenting time was a very good idea, since it is not possible to explain correctly a paper in even the double of time. So 10 minutes gives you an idea of the paper and in case you decide it is interesting, you can always read the paper or go and talk to the author.

I recommend you to check the whole list of presented papers here.

The Technical Tours were about visiting some the KIST laboratories like the Center for Intelligent Robotics, and the Healthcare Robotics Research Group. The first lab was dedicated to the use of social robots to enhance cognitive abilities of the elder. Basically focused on small humanoids that engage the elder into games that stress their cognitive skills. The second lab was more about robots for surgery.

Now, the most impressive activity was the DRC demo. That was amazing to see how the KAIST team performed a complete demo from beginning to end without suffering any trouble. The robot was able to get into the car, drive, get out, open a door, close the valve, perform a drill, walk through the drevis, and finally climb the stairs. Everything in a row. And they did this three different days. Based on my experience at several Robocup competitions, I know how difficult is to make all work for a demo, so I cannot say anything but Bravo KAIST!

Evaluating the conference from my point of view, I feel that it is very (too much) focused on control for humanoids. The bast majority of the papers are dedicated to specific control problems that humanoids face and that make them so much complex than wheeled robots. I personally missed more cognitive related papers where the fact of having a humanoid might be used to create more complex behaviours for those robots.

Also I missed a kind of panel of experts that analized the results of the Darpa Robotics Challenge and how a second round of the contest would improve (or not) humanoids technology.

May be next year! 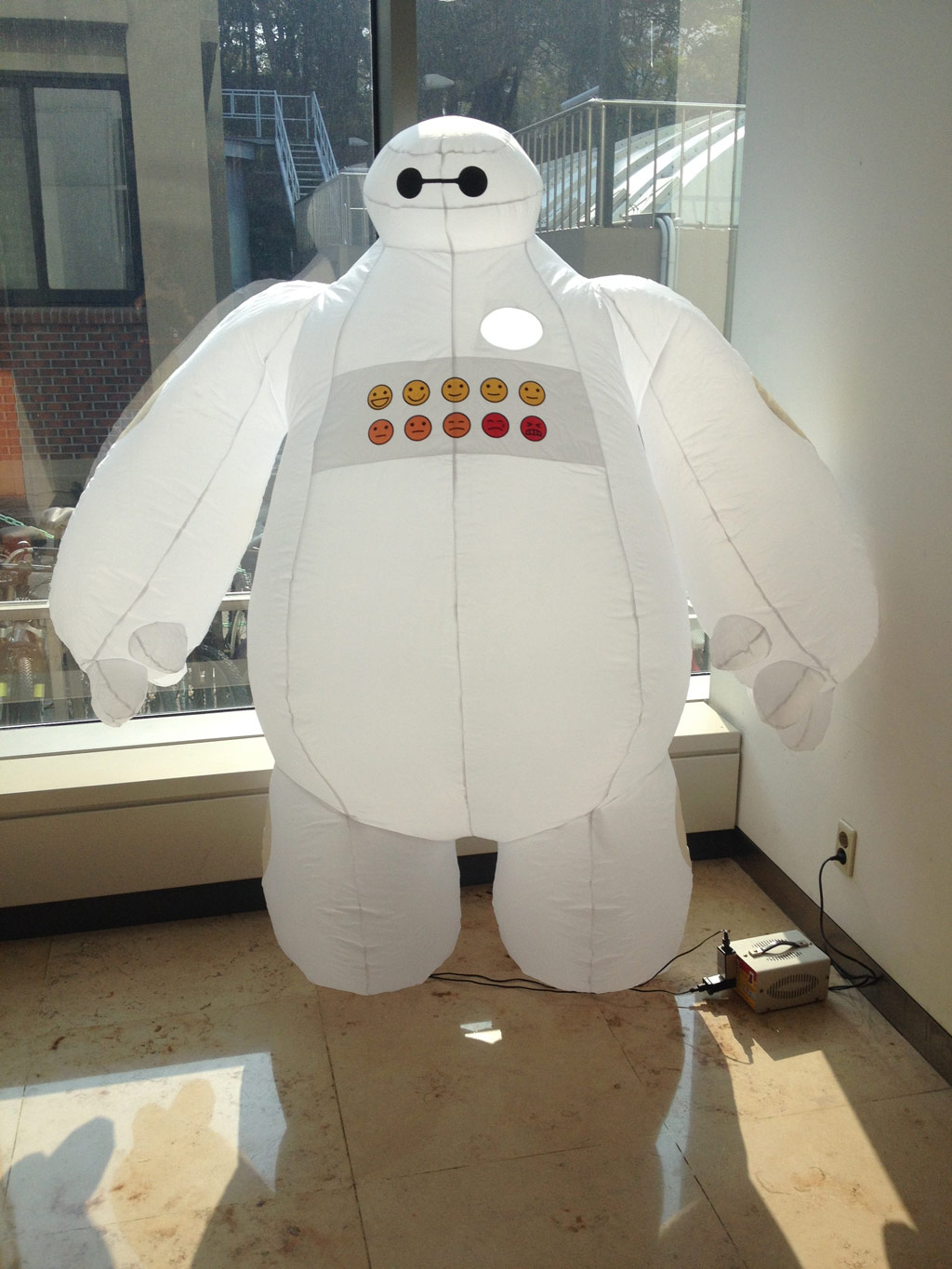